Commercial caves have a hard row to hoe. Caverns are natural wonders, and attraction owners must respect the beauty carved by Nature — the delicate flowstones, fluted draperies, spindly cave flowers. At the same time, all that splendor can’t be appreciated without a way for people to actually see it. Believe it or not, most cave visitors would be discouraged by the prospect of a half-mile belly-crawl through muddy water over pointy rocks.

So commercial caves provide convenient access — passageways drilled to connect chambers, ceiling breakdown removed to minimize obstacles, and lights strung for safety, and to create atmosphere. Fantastic Caverns took this remodeling ethos a bit further, accommodating jeep trams to drive through its passages. A lazy man’s dream tour, it cuts out all that senseless walking required in other caves. It’s the sole ride-through cave in the US, and one of only four in the world (the others are in Barbados, France and Slovenia). 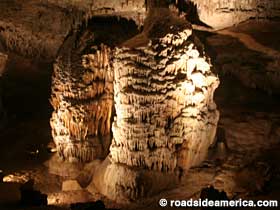 As a long-established tourist attraction, Fantastic Caverns stands out in the Springfield area, prominently featured on rental car maps and in tourism literature. In reality, Bass Pro Shops garners more foot traffic — but Bass Pro is really a store disguised as an attraction. Fantastic Caverns is a classic tourist attraction, with a formula that apparently still works, with its large visitors center, bustling gift shop and queueing tour groups.

There’s a quirky wrinkle to the Fantastic Caverns origin story — in 1867, after discovering the entrance, the landowner advertised for explorers to help him figure out what he had under his property. A team of twelve women showed up — with torches, lanterns, ropes, and ladders. After the preliminary expedition by the cave gals, who found untouched chambers with large, pristine formations, the owner knew he had something people would pay money to see. 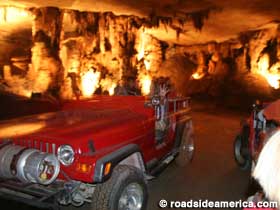 The Springfield, Missouri area has more than its share of caves — over 5,600 — so Fantastic Caverns needed something a little different. In 1961, the ride-through tours began — post-WWII jeeps with gas powered engines. The tours were popular, but cave walls don’t fare well against car exhaust. “People didn’t care much back then,” said our guide. Eventually “America’s Ride-Thru Cave” upgraded the jeeps to run on cleaner propane.

One hot afternoon we reserve spots on the next scheduled 55-minute long tour. We board the tram, which is a propane-fueled jeep pulling a couple of trailers with long metal benches (Insider Tip: Weasel your way to the front of the line and then beat all the kids racing to grab seats in the jeep with the guide). 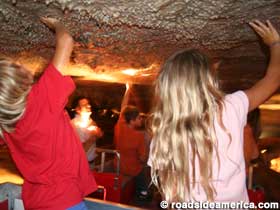 The jeep tram travels a distance from the main building to the cave entrance, and our tour guide and driver, Tony, stops briefly to point out an old steam engine that powered the cave lights in the early days. The jeep tram continues into the bunker-like entrance.

The first room we pull into is large, angling up a steep slope with plenty of stalagmites. Our purpose here is pure keepsake commerce — the guide instructs all to smile towards a woman with a camera mounted on the slope. The souvenir photo will be available at the end of the tour. And we appreciate that, as we know we won’t be allowed to get out of the tram to take our own photo.

A Fantastic Caverns tour is a mixture of subterranean sightseeing and historical anecdotes. “In the early 1900s, somebody tried to grow food down here,” our guide notes. “There are the remains of the mushroom beds.” Fantastic’s colorful history includes a period of ownership by the Ku Klux Klan, who conducted meetings and cross-burnings in the Grand Ballroom in the 1920s. And there are plenty of factoids about bats, blind cave fish, all the usual underground suspects. 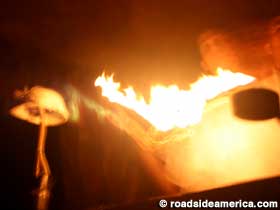 The jeepway winds along gentle slopes and is wide in spots, though not so wide that two tour trams can safely roar past each other. The drivers move slowly and cautiously — one low overhang could scalp a tall and inattentive tram rider.

Our guide is careful to point out hazards. He also delivers the requisite “Moment of Total Darkness” as part of a demonstration on the evolution of lighting implements. The total darkness only lasts, you know, a moment, and then our guide is steering to the drivable terminus of the cave.

On the back wall, a video plays on a mounted projection screen. Only a few minutes long, it stars a “hydrogeologist,” explaining his observations of water flow through sinkholes and underground rivers. While we enjoy this arcane knowledge — great party material — the presentation has a disjointed, tacked-on feel, like someone TIVO’d it off public television. At the video’s end, without a word, our guide starts up the jeep tram and heads back the way we came.

There are more impressive formations on the return trip, a stop at an old salt peter works, and a harrowing traverse under a particularly low ceiling. And then we’re back at the gift shop, with its ample supply of decorative minerals, t-shirts and souvenir miner helmets.